In Diversity’s biggest partnership to-date, Ashley Banjo will direct a series of heart-stopping moments for Grenade – everything from exclusive dances, TikTok challenges, mini movies, product launches and adrenaline-fuelled races. Everything will get the Diversity treatment.

Announcing the dance group’s partnership with the British company – known for its tie-ups with the armed forces – Ashley choreographed an epic military-inspired performance at an undisclosed Air Force base in England. The video can be viewed here.

Diversity founder, Ashley Banjo, commented, “Having fuelled our routines for years, we’re huge fans of Grenade. They’ve given us full creative license on a jam-packed year of surprises and we’re looking forward to doing amazing things – causing a stir and raising more than a few eyebrows.”

Grenade CEO, Alan Barratt commented, “With a track record of creating standout moments that demand attention – and generally getting shit done – we’re all in on this collaboration. Diversity’s creative flair and desire to disrupt is a perfect fit for Grenade – watch this space.”

It’s Carb Killa bar is the number one selling protein bar in the UK, and the company has appeared in The Sunday Times’ Fast Track Top 100 for seven consecutive years since 2014.

Further images can be downloaded along with a video of the performance here, which can also be viewed on YouTube here.

Founded in 2009 by husband-and-wife team Alan and Juliet Barratt, Grenade exports to more than 85 countries, and has appeared in The Sunday Times’ Fast Track Top 100 for seven consecutive years since 2014. The business currently employs 83 people and is headquartered in Solihull, West Midlands, UK. 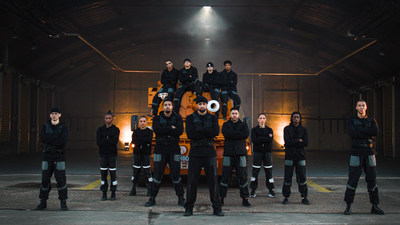